Are you guilty of these common marketing mistakes?

Thinking with yourself in mind, not your customers?

A logo chosen for personal reasons, a marketing strategy based on family members’ opinions, website content written for the author’s ego and not the audience. This has a detrimental effect on marketing efforts, it’s impossible to connect with an audience when not trying to appeal to them.

When focussing too much on our own preferences we lose sight of who will actually buy our products.

It’s important to not get bogged down with our own preferences and lose sight of the bigger picture which is ultimately exceeding potential customers’ expectations. Without understanding your audience it’s impossible to accomplish this.

An unsolicited email popping up in an email mailbox is never an ideal first impression. Spam lacks relevance and quality. When the email address is unknown it’s impossible to know anything about it. There is no way of being relevant to someone you don’t know.

Purchasing email lists has the potential to harm your business in other ways, the lists will have been sold to others, making them very low value and most likely to have been the victim of spamming already. You’re likely to get hard bounces which will harm your IP reputation. Anyone who has spent time nurturing an interested list of contacts knows the worth and would never dream of selling on such information.

The problem is you’ll irritate the masses, creating a poor perception of your business and there’s a strong chance you’ll become blacklisted on your server. Which would harm the deliverability of all of your emails. It can take years to rebuild the reputation of your IP address. If emails to clients start landing in spam folders it will become a significant nuisance to you and your business.

Phishing and scams have made people much warier of unsolicited emails. Email Service providers are getting tougher on spam too, which will make it increasingly difficult to get a return with this type of marketing.

Email is a great way to keep in touch with potential leads and clients. With a bit of thought and effort and good content, it’s possible to create your own lists of email subscribers.

The whole riddle of the fallen tree with no one to hear springs to mind here. Where once if you annoyed a customer they would tell family and friends, it could only go so far. Whereas now poor service can be shared with the masses via social media. Putting your head in the sand is not a logical option.

If you don’t monitor your online presence, the only one who isn’t listening is you. Which can and probably will harm your business. You” also miss out on valuable sales opportunities.

When you monitor your social media and internet presence when there’s an issue with a customer it can be caught early, before it gains momentum.

This can seem scary for businesses however the opposite is true. Social media is a great way to communicate with your audience and build your brand. It’s possible to turn even a negative into a positive.

This happened to Greggs the bakers when the logo they had displayed on Google’s search engine results changed to something rather offensive.

Social media enables a company to communicate on a level with their customers. Done appealingly it can build relationships with your audience.

How Greggs responded to their offensive logo (which showed up on Google searches) is a perfect example of this. It could have had a negative impact on their brand but they saw the funny side, their amusing converse with Google was watched by the internet in amusement. 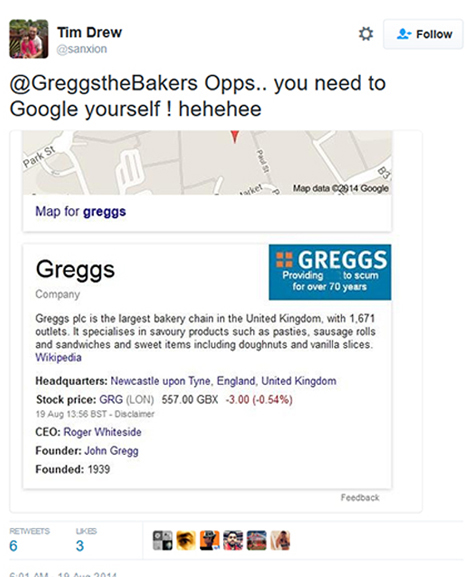 The way Argos dealt with this enquiry was genius, resulting in thousands of retweets and likes: 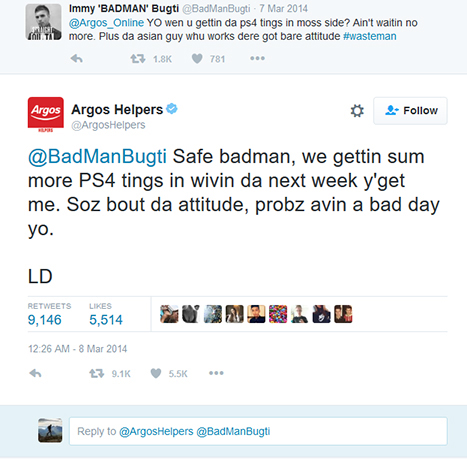 Another favourite is when Penguin books hilarious twitter spat with rival publisher went viral.
The Sainsbury’s fish pun battle was also a hilarious one to watch.

You don’t have a website or it poorly reflects your business?

We’ve spoken about this previously in (link to blog post). Before walking into your store or attempting to contact you, most people now research companies online. Time is precious, if you don’t meet their ideals and needs, they’ll quickly click across over to your competitors websites instead.

A website is your shop window, your chance to impress. If ignored you’ve lost a valuable opportunity.

Not analysing your returns / Continuously throwing money at old marketing with little return
Many companies are guilty of this. Placing the same advert in a publication out of habit without questioning the return. Concentrating social media efforts on completely the wrong platform.

Having a website but never viewing the analytics to see how it’s performing.

By not analysing marketing efforts we miss out on valuable opportunities to make them more successful. And in some cases throwing money away.

Enlisting the help of other companies without understanding the problem.

It’s difficult to gauge whether a service is offering value money when the work involved isn’t fully understood.
An example of this was a fledgeling company who were told how they would take the internet by storm using a company who’d cold called them, offering pay-per-click and SEO for a large fixed fee each month.

Because this was something they blindly knew nothing about they decided not to question it and just plough ahead.
A quick look at the businesses website it was obvious that SEO was not their strong point, which was why they were cold calling as opposed to sitting back with their search engine friendly website and watching the leads roll in.
Because from the outside SEO and PPC can be seen as very complex the company had decided that they had no hope of understanding the finer details and therefore weren’t going to bother trying.

The phrase used was: “I don’t understand these things so I thought I’d pay someone else to do it.”
What they were about to purchase would have been unlikely to pay off and could have ended up costing them a lot of money without seeing anything much in the way of a return.

It’s impossible to know how much work is involved when an effort isn’t made to understand the processes involved. A company which offers services they fully understand should be more than happy to explain them to you.

Cost is often the deciding factor in marketing, but going with the cheapest option is often money wasted if it fails to add value.

Moving away from doing things just to tick boxes, rather, do things to add value. Achieve something, which actually takes you toward a goal.

A marketing strategy which hasn’t adapted to the internet

The internet has changed marketing into becoming more open, allowing voices which would never have had a platform to be listened to.

Marketing has become open to smaller business, not just something for the big players. You no longer need a massive budget to make a big impact.

Inbound, SEO and digital marketing are all methods to reach this new audience. We now use Google not the Yellow Pages to find what we’re looking for.

Whereby advertisers would see viewers as typically one dimensional, the whole process is now much more interactive. We can pinpoint the exact piece of information with Google’s help. People expect tailored results to meet their queries, Google is putting a lot of effort and capital into keeping up with these constantly changing demands in order to keep its place as the world’s most helpful search engine.

Attempts to appeal to people in a way that deems them lesser so is impersonal and therefore becoming more and unpopular.